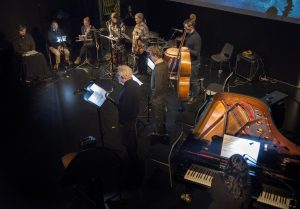 A single spoken voice starts, within moments followed by a second, then one by one the rest of the ensemble joins in. When Sean McCann’s piece New Music For Ensemble speaks, Fylkingen is filled with a clutter of softly pronounced vowels and consonants that coalesce into something different, something more than just separate voices. There is no coherent narrative, but there are words clearly spoken.

I automatically try to piece them together. But instead of a story forming the voices pool into a droning backdrop. When I stop trying to make sense of the words and listen to the voices together as one, my mind calms. Even when the ensemble start playing their instruments or sing, they fall within the same range, parts of the same grounding harmonics. This is perhaps not typical drone music. McCann is known as a drone musician for much of his earlier works, but this piece takes the drone further. 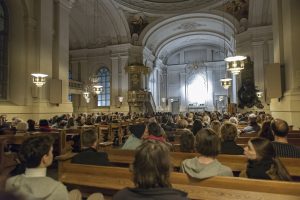 The collaborative performance by Sarah Davachi and Ellen Arkbro is based on music from the 17th century and performed using one of Western music’s most celebrated drones: a large pipe organ reverberating in an even larger stone building, a church.

In contrast to McCann, this falls squarely within traditional Western drone music, and instead of words and people we now have pipes and pitch. Humming as air is pushed through them, they create single pitches one by one. Grouped together they form something much grander, losing their individuality and creating a single whole from the multitude: a massive drone.

In its simplest definition a drone is a continuous tone, but this is rarely how we use the word when describing music. A drone can be formed of more than just one tone, and for it to work we want it to be fulfilling, we want it to evoke something within us. It must be both simple enough to not impose, but still hold our attention. Quick changes are usually best avoided. Like a hummed ohm, a drone is the bagpipes played by the busker outside your workplace, or even the air conditioner keeping you awake at night. A drone amplifies your sense of being without words. Not all drones are necessarily good for you.

In the church of Gustav Adolf, Davachi and Arkbro play sublime music. Faces with eyes closed and tranquil expressions fill the pews. The piece moves, as do my thoughts, although I am hard pressed to remember what those thoughts were. It is an hour-long collective meditation session, the sound from the pipes forming ground for us to ruminate from, or help us empty our minds completely.

As the music slowly dissipates through out the vast space of the church the audience awakes, stretching and blinking. The voices of the pipes are gone, and still dazed, we walk silently out into a chilly February evening.