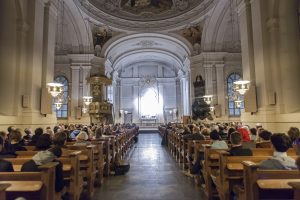 In its Latin root, the etymology of translation brings with it the notion of betrayal. Every time a material is transferred, a corruption takes place. With the demand or desire to preserve, a material is affected. To stay true to it, one has to betray it, in one way or the other.

I entered Terre Thaemlitz’s piece Deproduction as translator. I was asked to reshape its grammar and its language, but prolong the existence of the body of text. Choreographer Yvonne Rainer once said that the dancer’s body is the “enduring reality” in an ever changing structure of movements. Here Theamlitiz’s meaning becomes the body of the dancer, its movements the grammatical structures, and myself the reader who embodies the unavoidable gap between form and content. Perhaps it is in the betrayal of this gap that the relation between sender and receiver never coagulates, always forming new relations, taking new directions and thus remains.

Every relationship contains betrayal, particularly when it comes to experiencing art. Philosopher Jacques Rancière suggests a political practice where one embodies the gap between oneself and society. Perhaps we can transfer his line of thoughts to the engagement in arts? A reader – and spectatorship – needs a void. In arts and music we find the gap between written and read, the uttered and heard, activated by translations between social, acoustic and architectural layers.

The speed of the words written by Thaemlitz for Deproduction, which scroll over a projection, gives the sensation of listening, although no words are uttered throughout the whole video performance. Yet, as a listener, one gets the feeling of the words being spoken out loud. The words are organised as screams, whispers and frank statements, and it can be detected that they are written out of a need. The screening is a performance, it activates me as listener. Spectatorship here, is not enough.

When entering the room for the screening, I knew the text already. What I did not know was how it was about to be visualised. I found myself in an in-between: between the cinematographic and the sonic, where the question of the enduring – this time human – body, remained in question. My physical presence couldn’t be ignored, just like the body behind Thaemlitz’s text. Perhaps I should say bodies, as the piece included multiple narratives and states, where individual experience was put in a collective context. This lasted throughout images of rapes and orgasms, intertwined with manifestos for another future spectatorship; another embodiment of the void – that is: a new politics.

The day after, Sean McCann’s ensemble consists of multiple voices with different agencies: the individual voices form a whole. When performing his notes, the members of the ensemble enter into the same landscape of trust and betrayal as I did when translating Thaemlitz, and and as the audience did for his screening. We are affected by the absolute demand for attention.

Here, the layers of spectatorships were multiplied, in between each performer. The void previously pointed out between artist and audience, is here found within the ensemble, in their continuous translations of each other actions,  through vocals and acoustics, merged together by the electronic distortion of McCann himself.

In the large, circular central room of the city library, I find Ranciere’s void in a public space. I go there to listen to The Speaker, a piece on conflict within the social and architectural spaces of the library. With speakers all around the space, various groups of library visitors (some with, some without the intention of attending the performance) embodied the gap which here wasn’t an external part of a readership, or internalised in the ensemble and unreachable for the audience. Here, the gap between publicly shared space and individual relations and sentiments, is in the centre of the piece. Throughout the performance, it is translated by each of us who were present.

Pan Daijing performs on the microphone, documenting us on a handheld camera that she carries like a gun. When she points this gun towards the public space, the fourth wall is inverted and corrupted. The lens of the camera becomes her mouth and by recording our spectatorship, we are dragged into its structure, embodying the separation between actor and audience, the logics of performance. The wall falls, leaving us as neither subject, nor object of the performance.

Marxist literary scholar Denis Hollier once coined the notion “architectural disturbance”, referring to the way that meanings alternative to the reigning ones are corrupting the common sense. Just like the betrayal of translation, this outspokenness in The Speaker corrupts the social space where only certain ideas and experiences are accepted.

The most impressing fact about The Speaker is that the spectator isn’t the one to disturb. Instead, one is part of the architecture under disturbance. This is the gap. When leaving, we take the walls with us. Translation – the betrayal by conscious presence-making – is brought forth by the time passing inside the library, which people still enter for various reasons. The embodiment remains a shared fact and the performance goes on.

Later, time is given structure by the droning spheres of Ellen Arkbro and Sarah Darivachi, where all that is left of the Rancièrian gap is a tiny vibration, under the skin of each of us. The drone takes shape when sounding the outcome of embodiment: an attentive participant, including both space and humans, time and memory. All over the floor of the church, the fragments of previous betrayals are distributed to later be picked up by the ensemble Marginal Consort. They re-read, re-shape and reactivate all the dead shapes of social struggle, putting them again into business. Now, let’s start all over.